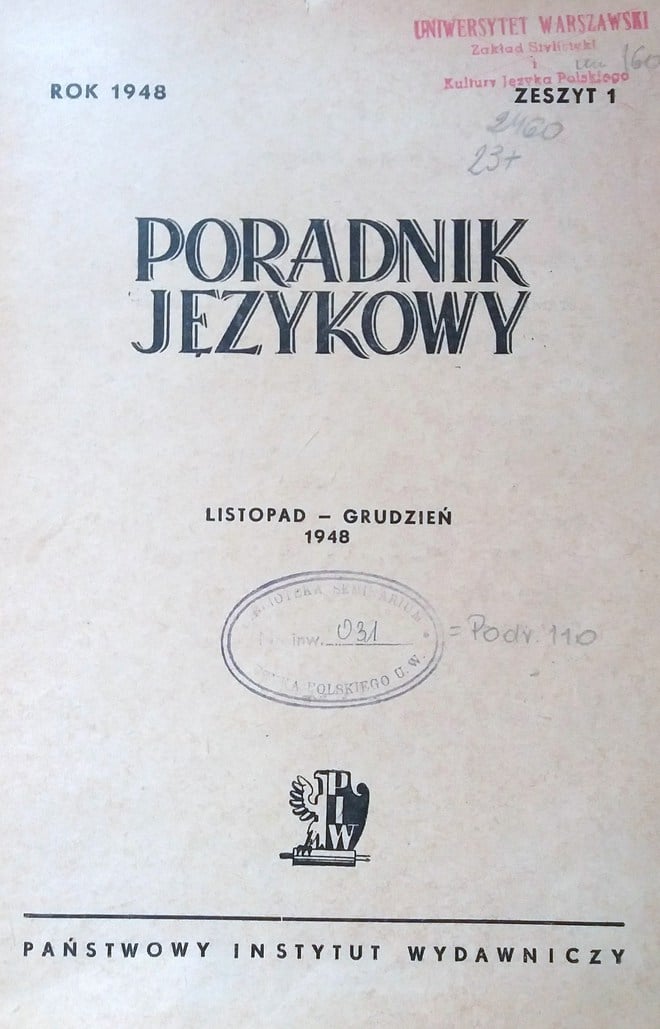 Poradnik Językowy (The Linguistic Guide) is a unique Polish scientific journal, as it belongs to the group of periodicals founded at the turn of the 20th century as a manifestation of academic development and the need to implement the positivist programme of organic work. The publication of Poradnik Językowy was launched in 1901 on the initiative and with private funds of Roman Zawiliński, a Cracow teacher and enthusiast of the Polish language, a linguist and ethnographer.

Since 1932 on – with a break in the period 1940–1948, caused by the war, occupation and hardship of the post-war period – the journal has been published in Warsaw.

In 1948, the year when the publication of Poradnik Językowy was resumed on the initiative of Prof. Witold Doroszewski, the Republic of Poland still existed, or was at least declared to exist, along with its democratic institutions inherited from the interwar period. However, certain changes in the way those institutions worked, which resulted from the fact that the political system was undergoing transformations, the Polish Workers’ Party (Polska Partia Robotnicza) seized power in Poland, and that democratic freedoms were restricted to an increasingly greater extent, became more and more noticeable. These were turbulent times. On the one hand, the civil war was raging and the Communist indoctrination was intensifying, but on the other, universities would revive, attempts to eliminate illiteracy were made, the process of Poland’s reconstruction and electrification was launched, and changes in the Polish economic system would slowly occur.

The first issue of Poradnik Językowy was dated November–December 1948. The editorial, which stated the journal’s mission (which will be discussed later), reflected the situation outlined briefly above in a rather concise manner. In the first paragraph of the editorial, the reader was notified that the publication had been resumed after a break caused by the war and difficulties with organising life on the ruins into which Warsaw had been turned, in order to accomplish the objectives defined before the war, as not only were they still topical, but they were also “[...] even more relevant and even more obviously worth efforts and work.”*

Since 1948, Poradnik (The Guide) has been published uninterruptedly, participating actively in groundbreaking events which have taken place in Poland after the Second World War. This has been possible probably because the successive editors, while focusing on the main objectives: to foster the Polish language culture by providing scholarly knowledge on the language and to shape a rational attitude towards the language among Polish language uses, have sought to remain neutral as regards worldviews and politics. This does not mean, however, that they were not forced to pay a kind of tribute to the state in the past, as the publication of the journal, and thus its continuity, used to be in the hands of its authorities. This favourable attitude to the state authorities was reflected in some papers, especially those published during the Stalinist era. Fortunately, such publications were infrequent and devoid of primitive propaganda.

I. Mission of Poradnik Językowy

The mission statement of Poradnik was worded by Roman Zawiliński, its founder. Jerzy Treder – the author of the bibliography entitled “70 lat Poradnika Językowego. Zawartość pisma w latach 1901–1970” (“70 years of Poradnik Językowy. The contents of the journal in the period 1901–1970”)*, published by Państwowe Wydawnictwo Naukowe publishing house in 1972, who also studied the periodical’s history – pointed out that this mission was implied by the very title of the journal:

On the one hand, it was to provide guidance on everyday language use, and at the same time to gather material for historians of the language and all linguists, which was recognised as its second objective. One can thus clearly see that the main focus in the journal’s title was on the word poradnik (the guide) and on the Polish language only, as notified in the subtitle [miesięcznik poświęcony poprawności języka polskiego (monthly dedicated to proper use of the Polish language)–added – JPP] .

In the introductory text “Od redakcji” (“Editor’s Note”), emphasising that the mission defined above would continue to be pursued, the editorial board of the journal whose publication was resumed in 1948, wrote as follows:

What we strive to accomplish is not only to popularise linguistics – firstly, because there are probably no fields of science that are independent of the human life: they always influence our lives, even if unintentionally, and secondly, because what we believe that searching for the social sense of linguistics in its entirety and working on the language as a tool for shaping thoughts, which is one of the most significant drivers of the cultural development and progress of the nation, is more important than translating the results of specialist studies into everyday language. […] the social sense of linguistics seems to us one of the most important components of the essence – even if theoretical – of this science.

“Work on language as a tool for shaping thoughts” was the main and the most important message in Witold Doroszewski’s attitude to research. His impact on the character of the periodical – not only at the time when he was the head of the editorial team and was the most important author of texts published in Poradnik Językowy – cannot be underestimated. It can be said that this mission has been pursued by the journal until now. Such a conclusion could be drawn from the fact that none of Prof. Doroszewski’s successors has defined the periodical’s mission anew although differences in the way it has been followed can be seen in their approaches to editing Poradnik Językowy. This can be evidenced for instance by the fact that Witold Doroszewski truly cared about regular publication of the “Explanations of words and expressions” column, which was edited by himself. This rule was observed also by Mieczysław Szymczak. However, neither Danuta Buttler nor, even more so, Halina Satkiewicz, who succeeded Mieczysław Szymczak as subsequent editors-in-chief of Poradnik, seemed to attach so much importance to this column. Prof. Danuta Buttler tried to edit this section herself, but she did not manage to do that regularly. Being seriously ill, at the end of her work as the editor-in-chief, she almost stopped working on the section. Under the leadership of Halina Satkiewicz, the column was published irregularly and was prepared by various authors from outside the editorial board; for some time, its space was used to publish communications from the Council for the Polish Language (Rada Języka Polskiego). The column was revived only when the position of Poradnik’s editor-in-chief was taken up by Stanisław Dubisz, who, however, seldom prepared it himself. He launched a new column: “Words and expressions” (“Słowa i słówka”), and – following his outstanding predecessors – edited it regularly himself. The “Explanations of words and expressions” section was usually prepared by external authors.

The fate of the “Explanations of words and expressions” column after Prof. Witold Doroszewski’s death is just one example of changes in the approach to the way the journal was edited. Notwithstanding the policy statement, the profile of Poradnik Językowy has been shifting from a popular science journal to a scientific one in the post-war period, which has been particularly noticeable since 2008.

The profile of each journal, its character, depend – quite obviously – on its editorial staff. As regards Poradnik Językowy, it should be noticed, however, that its profile has been determined by the well-established tradition and the desire to remain faithful to the intentions of its founder, while its character has always been influenced by the personality and academic esteem of its editor-in-chief and his or her ability to cooperate with the team of editors.