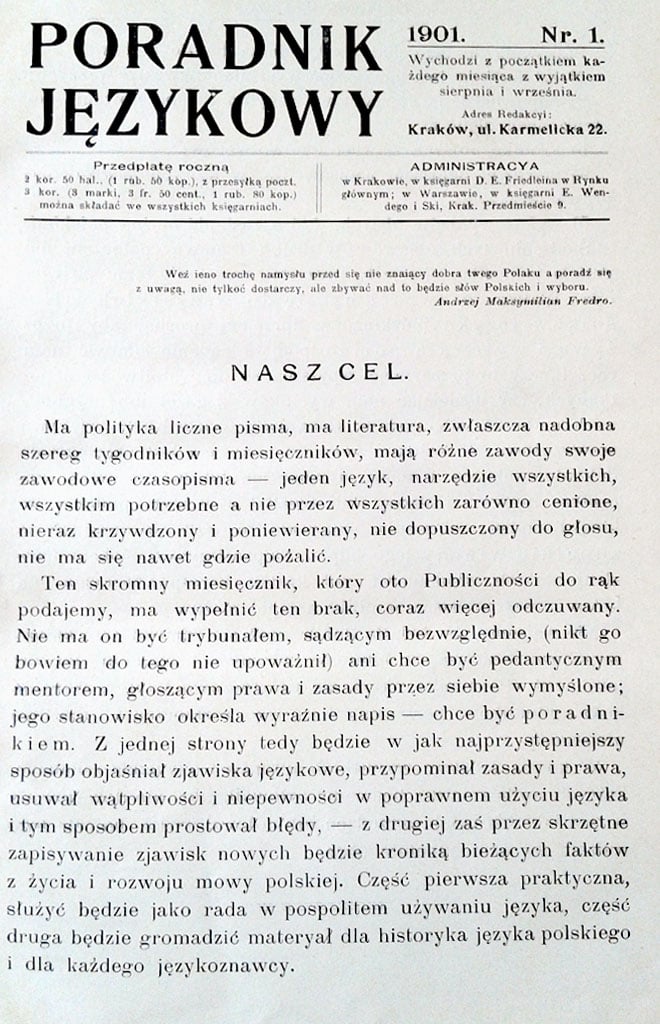 Poradnik Językowy (The Linguistic Guide) belongs to the “great trinity” of the oldest Polish linguistic journals founded at the turn of the 20th century as a manifestation of concerns about the condition of the Polish language, which had been “occupied” for over 100 years, and as a response to the increasing language awareness of the Polish language users’ community and the development of Polish linguistics. Founded in Cracow in 1901 by Roman Zawiliński, Poradnik Językowy is younger than Prace Filologiczne (Philology Papers), established in Warsaw on the initiative of Adam Antoni Kryński in 1884 (the first volume of this publication was released in 1885), and older than Cracow Język Polski (The Polish Language), which – as its variant (and later as its continuation and an independent journal) – was first published in 1913*.

Roman Zawiliński, a student of Lucjan Malinowski, was himself a gymnasium teacher, and it was teaching needs that inspired him to found Poradnik Językowy.

The Poradnik Językowy monthly was founded by Zawiliński one hundred years ago with his colleagues teaching at secondary schools in mind. The journal was conceived from concerns about the condition of the Polish language in public communication, which were expressed, among others, by Henryk Suchecki [a professor at the Jagiellonian University – note by S.D.] in his lectures delivered in Cracow in the 19th century as well as Fryderyk Skobel, Aleksander Walicki and Józef Bliziński in their publications [which were aimed at providing linguistic guidance – note by S.D.]. Cracow was not, however, the only place where publications on proper – i.e. free from errors – use of both spoken and written Polish were released in the last quarter of the 19th and at the beginning of the 20th centuries. L. Wieczor-Szczerbowicz, A. Krasnowolski and A. Passendorfer [authors associated with the academia from Warsaw and Lviv – note by S.D.] must also be mentioned here.
The first sentence in the new journal started with a phrase resembling the first phrase used in Merkuriusz Polski (Polish Mercurius) of the 17th century. [...]
“Politics has its numerous papers, literature, especially belles-lettres, has abundance of weeklies and monthlies, various professions have their dedicated journals – only language, a tool used by everyone, which everyone needs but not everybody appreciates enough, a tool which is sometimes abused and downtrodden, and which – not being allowed to speak – cannot even complain.”

Thus, indisputably, the main objective set for Poradnik Językowy by its first editor was to provide linguistic guidance (hence the journal’s title: Poradnik Językowy. Miesięcznik poświęcony poprawności języka (Monthly dedicated to proper language use)), understood as practical activities for elimination of language errors, promotion of proper language use, and establishment of good practices in linguistic communication. Linguists did not write about a language standard at that time, as this theoretical and academic term was coined much later, and the journal was initially – as it would be described then – “utilitarian and popular”, yet the stabilising and modifying character of the journal with respect to culture and language* was clearly inscribed in its formula from the very beginning. This can be evidenced by the columns which have been published in Poradnik Językowy in all periods in the journal’s history, that is:“Queries and replies” (“Zapytania i odpowiedzi”); “Gleanings” (“Pokłosie”); “Divagations” (“Roztrząsania”); “Editorial board’s letters” (“Korespondencja redakcji”); “Miscellaneous” (“Rozmaitości”); “Linguistic drolleries” (“Krotochwile językowe”); “Treasure box” (“Skarbonka”); “Proper language use” (“Poprawność językowa”); “For the sake of proper language use” (“O poprawność języka”); “From the mailbox of the Polish Radio” (“Ze skrzynki pocztowej Polskiego Radia”); “Explanations of words and expressions” (“Objaśnienia wyrazów i zwrotów"); “What is being written about language?” (“Co piszą o języku?”); “Words and expressions” (“Słowa i słówka”).

Regardless of the main objective of the journal, i.e. to provide linguistic guidance, Poradnik Językowy has comprised a section entitled “Papers” (“Artykuły”), dedicated to issues approached from the theoretical point of view, since its first release (in 1901). In the outline of the periodical for 1911, this section was already expanded and divided into the following thematic sub-sections: general topics in the field of the study of language, issues related to the history of the Polish language, the history of spelling, contemporary research on the Polish language. However, the postulate to make the journal more academic became a matter of fact only after Poradnik Językowy had been moved to Warsaw (in 1932), when the Ministry of Religious Denominations and Public Enlightenment (Ministerstwo Wyznań Religijnych i Oświecenia Publicznego) recommended it to be used by schools (also in 1932) and when it became a body of the Society for Proper Language Use and Culture Propagation (Towarzystwo Krzewienia Poprawności i Kultury Języka) (in 1934). At that time, Witold Doroszewski was appointed its editor and the editorial board was composed of the following individuals: Henryk Friedrich, Halina Koneczna, Jan Rzewnicki, Stanisław Słoński, Stanisław Szober, Józef Tarnacki.

In the Society’s Statutes adopted in 1938, Poradnik Językowy was recognised as a platform for sharing ideas on the Polish language and as a journal dealing with the language of the daily press, official publications and translation, as well as issues related to proper use and culture of the language, while the editorial board extended the journal’s responsibilities by the objective to coordinate Polish language teaching at all levels of education, i.e. from primary schools to universities. The academic study of language was supposed to support practical measures.

The new editorial board modified the character of the journal, which became more modern and more a scientific [...]. In the new Poradnik, there was a change in the proportions between the prescriptive and guidance part and the part containing papers on general linguistic issues or descriptions of selected linguistic phenomena. Thus, guidance lost its dominant position in favour of linguistic reality description. Changes affected also the very nature of guidance. The new editorial board abandoned – in response to readers’ requests – the method of disapproving of linguistic errors while trying to draw readers’ attention to examples worth recommending and to present models to be followed.

The practical aspect of the formula of a linguistic guide was thus enhanced with the theoretical one, and the utilitarian aspect – with the scientific one, which involved not only a description of specific language messages in terms of their correctness and communication efficiency, but also a description of the entire language system, language standards and all (intralinguistic, extralinguistic and non-linguistic) factors which co-determine them, both from the synchronic and diachronic viewpoints. Poradnik Językowy has thus become a publication providing information and guidance related not only to proper use and culture of language, but – in broader terms – to Polish linguistics in general*.