On Poradnik Językowy in brief 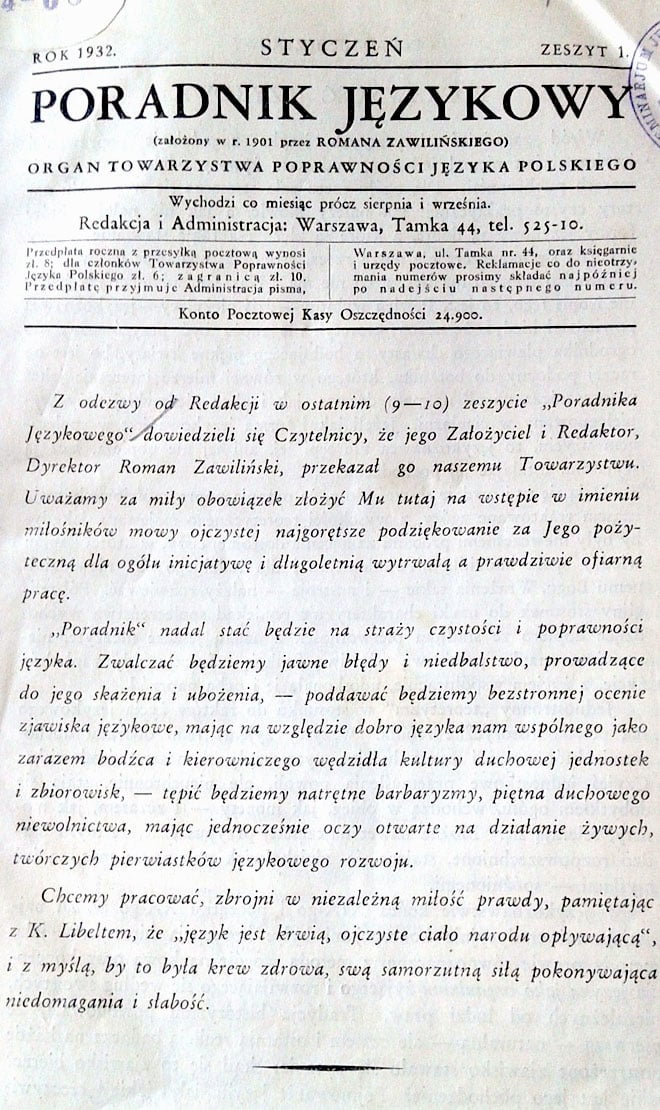 Poradnik Językowy (The Linguistic Guide) was established in 1901 by Roman Zawiliński, a teacher at a middle school in Cracow. It is one of the three oldest Polish linguistic journals (the earlier journal: Prace Filologiczne (Philology Papers) 1884, the later journal The Polish Language (Język Polski) 1913). The journal was not published in the years: 1913 – 1918, 1924, 1928, 1939 (from September) – 1948 (until October). In 1932, Poradnik was moved to Warsaw, becoming a body of the Society for Proper Use of the Polish Language (Towarzystwo Poprawności Języka Polskiego) (from 1934 – the Society for Proper Language Use and Culture Propagation (Towarzystwo Krzewienia Poprawności i Kultury Języka), today - the Society for Language Culture (Towarzystwo Kultury Języka)).

Form the very beginning, Poradnik Językowy has addressed the issues related to Polish linguistics, in part also – Slavic and general linguistics, and today also speech therapy. Almost all prominent Polish linguists written papers for Poradnik. By dint of the deep commitment of its editors and persons cooperating with them, Poradnik Językowy played a socially significant role over various periods of the Polish history: during the partitions, in the twenty-year interwar period, after World War II and during the political transformation. It was a forum where linguists as well as a wide circle of persons who found the issues of the Polish language to be of particular significance could exchange ideas, theories and views.